The Blind Suns played during Spacefest! 2019. It was one of the strongest performance that weekend. A refreshing dreamy pop music, with a good presence on stage and full of energy that perfectly fit the lynchian Drizzly Grizzly together.

The Blind Suns is an Polish/French duo composed of Romain Lejeune (Guitar, Vocal), Dorota Kuszewska (Lead Vocal, Guitar) and various musicians on stage. They released their first LP “Baltic Waves” in 2014, followed by “Offshore” in 2018. And a couple of EP in between.

They are under the influences of the 90’s Manchester shoegaze/pop movement (definitively The Stone Roses, just listen to their song 13:31 in their first LP), Dick Dale (pioneer of surf music), the Psychedelic movement of the 60’s, and many more. 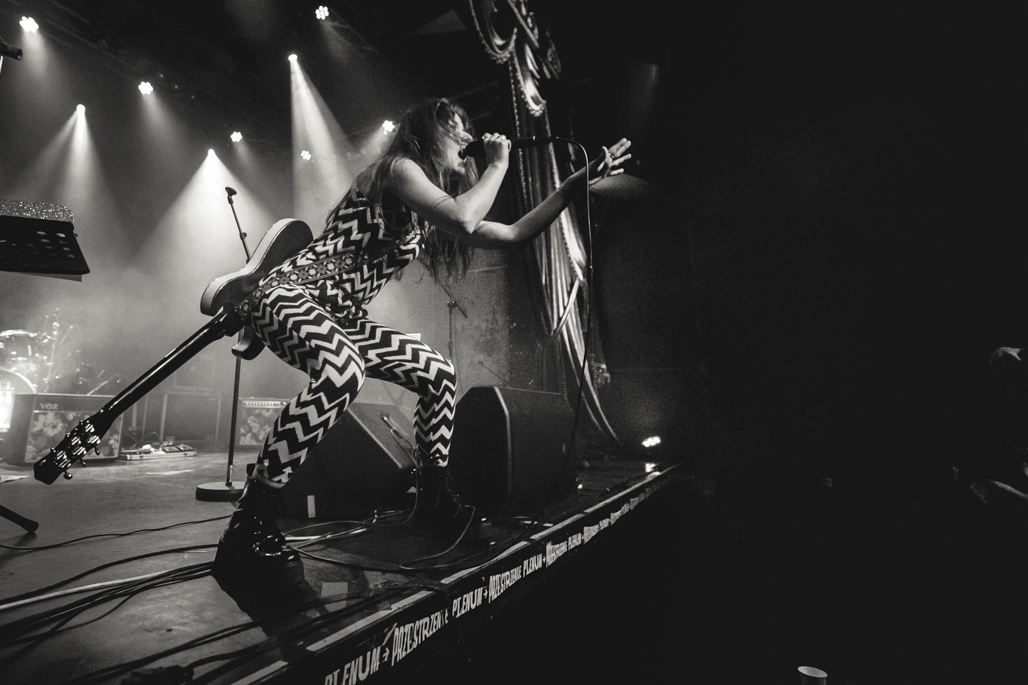 We Shoot Music: We saw you during Spacefest here in Gdansk. You were definitely one of the strongest band there. Very nice music, refreshing and full of energy on stage. What did you think of the festival?

Dorota : Wow thank you so much ! Honestly everything was perfect, from the amazing crew, great other bands, the pretty decoration of the stage, to the warmth of the audience. It was the momentum of the polish tour for us.

WSM: You were already touring Poland before the summer, again this winter. Does that mean you found a public in Poland?

Dorota : We’ve been touring all around the world but didn’t really think about Poland before even though I’m originally polish. However, earlier this year, the Spring Break festival in Poznan invited us to play, and we quickly found an agent (Sideways Booking) to build a 10 days tour around it. We loved this tour so much, that we came back for Space Fest and another 10 days tour and we’re already planning bigger tours in Poland next year. We certainly found an audience, but after all, it’s just a very big pleasure to tour over there, really.

WSM: For Romain what did you think of the country? How was your experience during your tours here? Is there any polish band you know and appreciate?

Romain : I’ve been in Poland a few times before because of Dorota, but it was more a vacation thing, not touring. I love the country, the food, the warmth of the people, and I can see that the country is improving so much, the roads are super new, the cities very beautiful and clean. Musicwise I honestly only know old stuff like Lady Pank or ONA, but I’m gonna check the new great stuff before the next tours, I promise.

WSM: For Dorota. I’m here for 12 years (in Trojmiasto), and I find the indé musical scene in Poland very lively. How do you keep informed? I find it not so easy, and time consuming for me to stay in touch with the french musical scene.

Dorota: I must agree on that. It’s pretty time consuming looking up the web and searching for good indie, alternative bands when you don’t live in the country. Living in France, I know its music scene pretty well but I’m quite lost when it comes to Poland. I definitely have to make some amends with this matter (laughs) but it’s really motivating since we started touring in Poland. I’m really curious about Polish indie scene.

WSM: Only political question. What do you think of the direction that Poland is taking now?

Romain : Difficult subject for sure, as we’re not living in the country, but it seems like Poland is one of those countries currently submerged by populism and it’s really sad. Especially considering the lost of a lot of liberties like press, religion or justice. In Europe, Poland had for the last few years rather a good reputation thanks to Donald Tusk, one very bright and clever polish politician that was a very good head of the European Union. It’s sad that he’s discredited in the polish opinion, he would have been a very good leader for the country I think.

WSM: Back to music, how did you meet and decide to form The Blind Suns?

Romain : We met a long time ago during a school exchange between our high-schools in France and Poland. It was a musical love at first sight, then Dorota moved to France and we started playing music together and forming bands. The Blind Suns is our latest project, it started as a studio project and quickly became our main band as the feedback from the press and audience was great.

WSM: Can you tell us what is the song or album that personally inspired you to become an artist?

Dorota : I’m a little bit ashamed today about my first musical reference (laughs), but seeing The Kelly Family live on TV when I was 7 years old was definitely the stimulus for my choice of becoming an artist later.
Romain : Nirvana / Nevermind – for me, like for a lot of teenagers in the 90’s, Nirvana was one of the most exciting thing that happened in this decade, for the music, and the rock’n’roll attitude.

WSM: What are your dreams as a band? Any projects?

Dorota : If you had asked the same question a few years ago, we would have answered pretty classically, that we would like to do bigger shows, have a bigger audience, travel more, release more albums. But now, after turning 30, and after all the great great tours we had, we feel really concerned about bigger causes like doing what we do with less ecological impact for example. At the moment our main obsession is to support and to be involved in improving the women/gender situation in the music business and fight against the horrible behavior of some established men in the industry towards female artists (my experience talks). In order to do that I can already tell that it’s gonna be the subject of some songs in our next album (release unofficially planned for the late 2020) and that my voice will be heard as I’ve been chosen to be a Keychange artist for 2020, more info here : https://keychange.eu

WSM: I find a striking resemblance regarding your track “13:31” and “I’m the Resurrection” of the Stones Roses (after the 6’30 mark). Maybe I’m overthinking it, but it looks like your song is a continuation of theirs.

Romain : It wasn’t on purpose at all, but we take it as a huge compliment being big fans of Stone Roses. This band is a major influence of ours for sure !

WSM: Where can we find your albums in Poland (CD & Vinyls)?

Romain : For now, we don’t have a physical distribution in polish stores, but we’re actively looking for a label that could do that as we plan to tour more and more in Dorota’s homeland 🙂

WSM: Thanks for your time. If you had one last thing to say. What would you say?

Dorota : Merci beaucoup We Shoot For Music, on vous aime <3

All non-live pictures by The Blind Suns

1 thought on “Interview The Blind Suns”